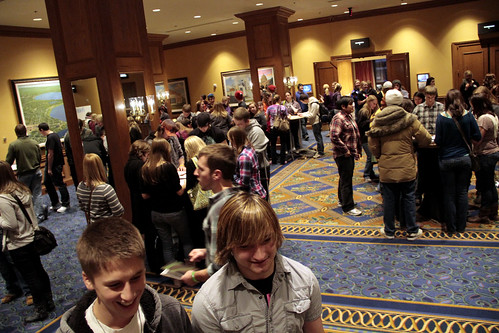 While digital hasn’t yet killed analog, there’s no question the rise of intangible goods/services with reproduction cost near zero has allowed event organizers to broaden both their information offerings and the geographic accessibility of conferences.

Just like ebooks, nearly every calendar program and too much software (dubbed skeuomorph — Apple is horribly guilty of this), much of what we’re already doing online is a digital copy of an analog process.

All of the previous are good things, but they aren’t quite the leap forward many of us have been expecting. While we’re proud of our technology that combines smartphone apps with printed QR codes, we know that this is only a start in making conferences better, more productive and perhaps most importantly, cheaper/more cost effective.

Is it really digital VERSUS analog?
Some might think that Gen Y will eventually kill the conference, as they would rather use Facebook and other digital means to stay in touch, but we disagree. What Gen Y will do is turn away from the usually excessive waste of typical conferences in favor of smaller, more people focused events that focus on interaction and experiences, rather than information and advertising.

If you’re an event organizer that’s fighting this, if you think your pay/commission is going to take a hit because of ever-lowering profit margins and if your analog waste doesn’t back down from obscene levels, we think you won’t be around very much longer.

But that doesn’t mean there isn’t still time to evolve.

Let’s do this together.